That Saturday night, I snored.

I should mention that I rarely snore. The last time was five years ago during my first AIDS/LifeCycle bike ride from San Francisco to Los Angeles. During that little 545-mile adventure, I would fall into my tent each night so exhausted I could barely write my daily email to my donors telling them about the day’s journey. Needless to say, Chris was just as surprised as I was and made a point of waking me up in the hopes of getting me to cut it out.

Unfortunately he did this around 5:00 a.m. and even more unfortunately this had the effect of keeping me awake. As hard as I tried to fall back asleep, I finally gave up at 7 and went to the hotel lounge for some breakfast. I ended up staying there until well past noon while I waited for Chris to get some more sleep, reading my book and hoarding a few items from the breakfast service for his eventual appearance. After he finally emerged into the sunlight and has a bite to eat, we headed back to the center of the city and toured the Acropolis Museum.

Bult in 2007 over the ruins of an ancient Athenian settlement, the museum offers an extensive look into Athens’ most well-known landmark. And with an entrance fee that’s 1/4 of the Acropolis itself, it’s actually a far better deal if you want to get up close with the sculpture and story of the Parthenon and its (once) neighboring buildings. Architecturally, the museum is a cleverly built affair that utilized thick glass for its floors in multiple areas to create the sense of walking on air. It’s a trick best put to use on the first floor, allowing visitors to see the ancient dwellings discovered beneath the footprint of the building.

The centerpiece is the top floor gallery, which features the murals of the Parthenon laid out as they originally were on the building. It provides an accurate sense of the size of the thing that’s just beyond the floor-to-ceiling windows surrounding you. The Greeks also don’t mince words when it comes to the telling of how the site was essentially raided by the British in the 1800s. Many important pieces still remain out of the museum’s reach. Luckily, they have this LEGO restoration of the Acropolis to use as a reference: 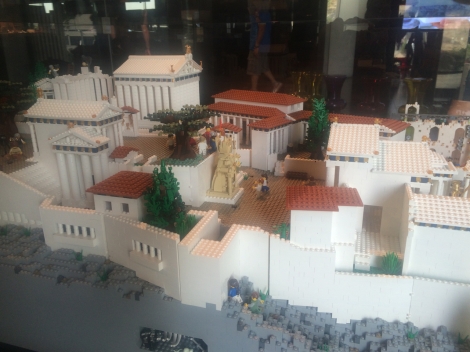 After a couple hours at the museum, we took our time wandering up past the Odeon of Herodes Atticus to the Western entrance of the Acropolis, where staffers politely suggested we come back the following day since entry would be free in observance of international Monument Day. This wasn’t an option for us, but instead of going in we made our way to the nearby Aeropagus Hill where all the locals were hanging out in the afternoon sun. Our perch afforded an expansive view of the city and we couldn’t help but join in the fray of selfie-snapping.

From there, we wandered down the rough hillside and found ourselves in the middle of the Monastiraki flea market, another one of the scenes my father in-law had said we shouldn’t miss. It was a peculiar marriage of swap meet fare and tourist trinkets. Tales filled with old Russian Cameras sat next to others covered in retro flight poster magnets and wooden Greek easter eggs. Tavernas were filled with tourists pausing in the warm afternoon for beer and a healthy dose of people-watching. We kept on walking back towards the area we had been the evening before, moving aimlessly along random side streets until eventually we came upon a subway station. Salvation!

Having been awake longer and with less sleep under my belt, I was ready to return to the hotel for some quiet time. Back at the Intercontinental’s executive lounge, we had some nibbles and contemplated going out to the nearby Koukles Club when I discovered it was a mere six blocks from our hotel. But just as we stated contemplating the idea, our friends from Omaha appeared and drew us into another long evening of chit-chat and laughter.

Next thing we knew, the lounge was closed and we were following Jan & her husband back to their room so she could hand off her National Geographic guidebook to Greece and lighten her bag before they headed off to Prague in the morning. And chat some more. We learned that in addition to being a federal judge, Jan had a cooking show on PBS for a while. We were bound for Crete ourselves the following day, so after a few more minutes of conversation we finally found a chance to swap contact info and politely bid them goodnight.

Once again, it was late into the evening and I was running on fumes. Between all the walking and talking, Athens was turning out to be a pretty exhausting place. I crawled into bed and maybe read two pages of my book before passing out.