One of my design hobbies is creating cycling jerseys & shorts for a club I belong to called the Pork Pedalers. As I was mulling over the direction to take with the 2016 kit during the holidays, a good friend left a present under my Christmas tree that I simply couldn’t stop going back to: Airline Visual Identity 1945–1975, Callisto Publishing’s 380+ page study of mid-century aviation design. I say study, but it’s truly a love song from admirers of the branding & advertising evolution that shaped the Jet Age and defined air travel as exciting, sexy, and safer than ever before.

AVI examines the brands of thirteen of the world’s most well-known airlines, including several which no longer take to the sky but nonetheless had a huge impact on consumers and design professionals alike. During this period air travel still catered mainly to the affluent class so airlines took the emerging general trend of cohesive corporate branding and built the first truly immersive brand experiences. And though the book’s author Matthias C. Hühne maintains in the preface that “this is not a book about posters,” he devotes a generous amount of space in the book to displaying them with museum-like simplicity and clarity. It’s an impressive catalog, and many of the posters included are from his personal collection. As a result, the book functions extremely well as a coffee table book. However, there’s value in sitting down with this tome and actually reading the stories about how all this iconography came to be.

UA timetables in the 60s

Graphic standards for the “Flying U” logo

The “Flying U” branding in use 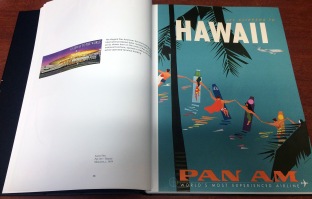 Pan Am Hawaii poster & promotional brochure for the JFK Worldport

Though certainly the focus of this book, Hühne waxes not just about the branding and design but the airlines themselves. He gives readers a feel for each brand’s personality and history with a voice that’s distinctly affectionate but not syrupy. The loss of giants like TWA, Braniff & Pan Am is mentioned in a relaxed fashion, an unfortunate natural consequence of things as opposed to some great catastrophe (though for the many who worked there, it obviously was). Each essay is well-balanced and engaging.

Anyone interested in the study of graphic design will no doubt recognize many of the names that pop up through the book– Industry legends like Mary Wells and Saul Bass sowed their creativity in almost every commodity category during the age of Mad Men. While the details of thought processes and identity mark development may not be everyone’s cup of tea, this is not a boring book for even the most casual fan of the era. Hühne weaves in just the right amount of detail before backing away from the reader and letting the pictures speak instead.

For the truly nerdy, the back of the book features a visual reference of expanding route maps and carrier statistics during the covered time period. Most, however, will likely become lost in the beauty of a favorite airline’s ad campaign and never notice the appendix (of sorts) at all.

Airline Visual Identity 1945–1975 sells for $70 on Amazon. It’s a a great addition to anyone’s coffee table rotation and a necessary one for any graphic designer’s reference library.

Posters from a BOAC campaign