This post is adapted from a series of emails I sent to the people who donated to support my participation in AIDS/LifeCycle 2014. If you’d like to support my 2015 ride (and the thousands of people living with HIV that depend on the Los Angeles LGBT Center for health care), click here. And many thanks in advance if you do.

What a long day. It was so long that when I arrived at our hotel and found the internet access was basically nonexistent, I gave up writing my daily account for you and spent the evening in camp instead. But despite being long (87.5 miles), it felt like a day of redemption.

Things started out… rough. When I located my bike in the “parking lot” as our team was preparing to ride out, I discovered my rear tire was essentially shredded. Whether it happened on the truck that brought it to camp or as I had rolled into Bradley yesterday, I will never know. A trip to the Cannondale bike tech team (which donates their time and resources to AIDS/LifeCycle during the ride) had me up and running again, and we discovered that two of my spare inner tubes were faulty. thankfully, I had a third spare back at the gear truck which I ran and fetched for them to use.

Once on the road, I hurried to catch up with the other boys who had a solid 20-minute head start on me. I found them at the first rest stop preparing to climb the Evil Twins (a pair of long, winding climbs on Highway 46) and together we tackled some of the most grueling road of this entire ride. I’m proud to say that the third time up these monsters was easier than it had ever been. Was it the new Gatorskins tire? doubtful. The mild weather? It certainly helped. But more than anything it was making that 1500+ foot climb with my teammates and then flying down the other side to the coastline together. I wore an appropriate jersey for the occasion: 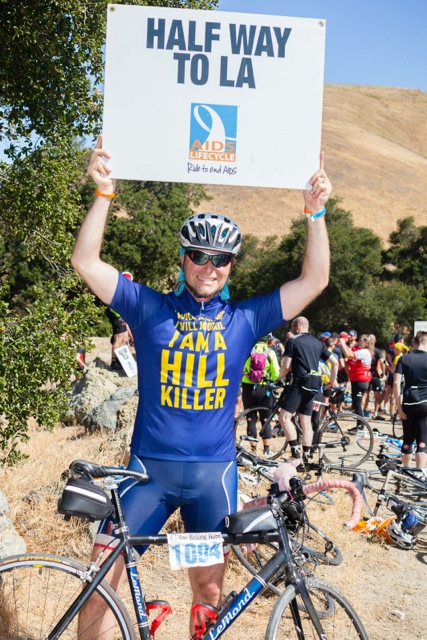 We pushed hard through Cayucos and Morro Bay into the lunch stop at Cuesta College on the edge of San Luis Obispo under sunny skies, intent on making it to Pismo Beach before Old West Cinnamon Rolls ran out of bacon cinnamon twists. I don’t think I’ve ever ridden that segment so fast before. Usually Morro Bay is an unholy traffic nightmare as cyclists stack up at the corner of Morro Bay Boulevard & Quintana Road. But this year, we just breezed through. We made a quick stop at Rest Stop 3 to refill our water bottles and pose for a photo.

Imagine our surprise as we rolled down the main drag of Pismo Beach to find that Chris had already bought some treats, saving us the hassle of waiting in the long line of cyclists stretching along the sidewalk outside! (I could really get used to having him come along this journey with me.) Now, as proud as I am of my famous maple bacon scones, I have to concede that they’re pretty much dog biscuits compared to these magically gooey confections. Seriously, they are worth the drive to Pismo all by themselves. 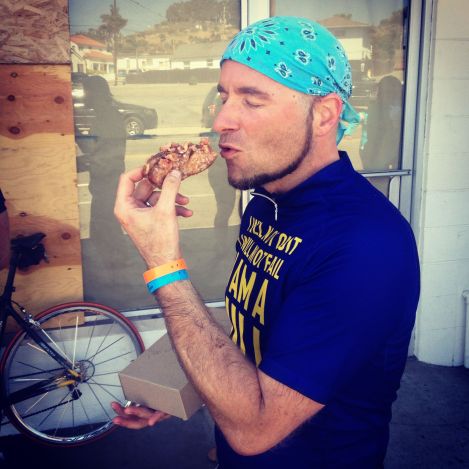 From there, we rode South through Grover Beach and Oceana before turning inland towards our final destination of Santa Maria. The route was changed this year in a very good way, eliminating several miles of climbs and dips through the town of Guadalupe. Instead, tail winds guided us through a small valley filled with oak trees and farmland filled with pea bushes, kale, onions and more. But the best part was the sweet smell drifting from the strawberry fields as we returned to the 101 freeway and rode an adjacent bike path straight into camp at 6pm. It was the best day 4 ever, hands down. And not just because I had my nails painted red that evening by an amazing gentleman named Cromwell who was participating in AIDS/LifeCycle as part of an exchange program of sorts.
At home in Bejing, Cromwell is a pilates instructor and a professional chef. He’s also one of the top fundraisers for AIDSWalk China. In the few minutes we spent chatting, we bonded over the importance of finding a vocation you are passionate about and how that helps you create great things. Most of us aren’t lucky enough to end up with a job like that. I suppose it’s easy to forget our passions when life forces us to act like grown-ups most of the time.
And I almost forgot… During the evening announcements, they premiered season 2 of Orange Is The New Black. So, to compliment the festivities Rest Stop 4 went with an OITNB theme and put us all in jail: 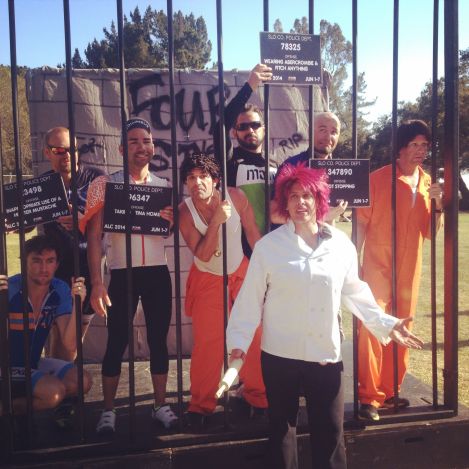 Day 4 turned out to be exactly the kind of redemption I needed after yesterday, lifting my spirits and preparing me for everything to come on Red Dress Day. But to read about that, you’ll have to wait for my next e-mail. Stay tuned…