At long last, the much-overdue conclusion to our Japan Field Trip is here. I’m a bad gecko for not posting this sooner. Feel free to shame me with all your might.

It’s okay. I deserve it.

Now… where were we? Oh, yes. The sun was rising on our last day in Kyoto. We awoke  with a feeling that was nothing less than bittersweet. Knowing that we had to be at Kyoto Station by 4:30 to catch our train to Kansai Airport meant that we couldn’t really fill the day with many adventures other than eating and shopping, because trust me when I say we can fill a day with perusing wares. We hadn’t bought all that much on our trip thus far apart from KitKat bars and a few gifts for friends, which left us anxious to ensure we didn’t come home without a few souvenirs of our own. So we started our day with a stop at one of the many bakeries in downtown Kyoto and sat down on the bank of the Kamogawa River to plot our route. As I scarfed down a pastry that looked remarkably like Mooby the Cow, I looked up and noticed the grumpiest building I have ever laid eyes on: 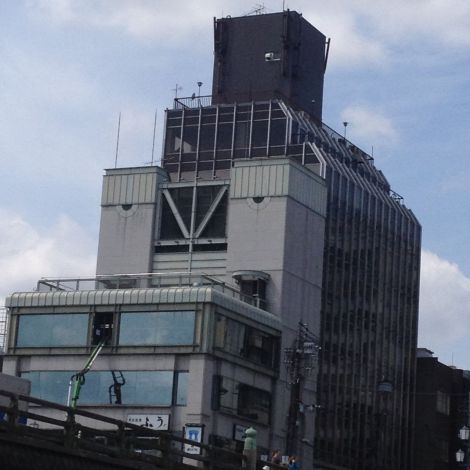 It looked the way I felt about leaving Japan.

With Teramachi Street’s covered shopping arcade so close to our hotel, this felt like the smartest place to start trolling for goodies. Several friends had insisted I must come home with a kimono and so I proceeded to spend nearly an hour trying on different ones in a vintage shop before giving up and deciding to just try and find something online after we returned home. I couldn’t help feeling I was just wasting precious time. I decided to be practical and popped inside the nearby Uniqlo, where I found a cool tee shirt only available in Japan as part of a local artists series for fifteen bucks. Chris had hoped to procure a cute Japanese hooded sweatshirt, but this proved to be a real challenge. All we could find were oversized cardigan sweaters in the stores, a style which really isn’t one he can work back in Los Angeles without being a 50 year-old professor at a CSU.

Teramachi was still a lot of fun even if I didn’t find a kimono.  Honestly, the signs alone were worth the time we spent there.

This sign got twice as weird after I learned what Fashion Health is in Japan.

At the 100 Yen Store we found great buys on useful things like penguin & otter stickers and stylish handkerchiefs for our dog. We also bought an obscene amount of fancy temple incense at another shop along the street very close to this rather unfortunately named restaurant:

No, we did not go there for lunch. We went to, drumroll please… 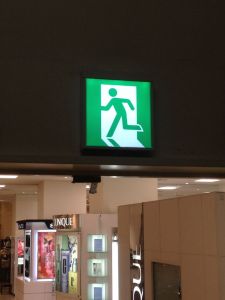 No, that’s not the entrance to the food court at the Aperture Science Enrichment Center. It’s Daimaru! Yep, we went back for another round of department store foodie fun times because if there’s one thing I can never have too much of, it’s a room filled with fabulous obasans. This time we tried out the main cafeteria and dammit if I can’t remember what I ate. That means it was probably yet another in a long string of delicious katsu because it’s pretty much my go-to Japanese comfort food and I was feeling glum about our impending departure.

On our way back down through the store, we wandered the men’s department and again found no signs of a cute hoodie. We consoled ourselves buy heading back out to the street and buying more KitKats and several Starbucks Kyoto mugs. I also stumbled across a little $6 bottle of 12-year whiskey from Nikka called Taketsuru that I hadn’t seen before so I snatched it up, as it brought the total number of Japanese whiskey varieties coming home in my luggage to five. (It also turned out to be my favorite of the bunch, though I’m sad to report that back in the states a full-size bottle runs around $60)

Before we knew it, our day had run away from us and we returned to the hotel to pack our purchases and head to Kansai. With glum faces, we boarded the Haruka express train and watched the world go by for 70 minutes.

Kansai airport was yet another example of why air travel in the United States pretty much sucks. The Renzo Piano-designed building was a simple and elegant blending of steel and glass. Immigration was fast and nonintrusive. The ANA lounge was quiet and while small, featured amenities I did not expect like a segregated smoking area that functioned a little like a clean room.

The international departures level at KIX 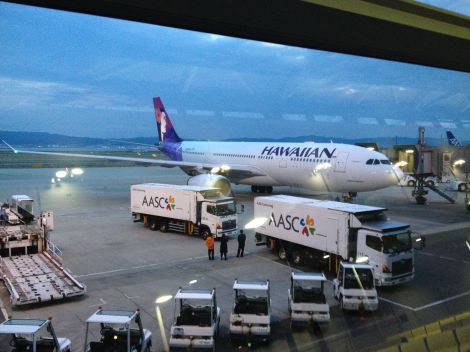 They’re just standing there, staring at our plane.

In just under eight hours, we found ourselves on the shores of Honolulu, cracked out from lack of sleep even though we had seats up in the front of the plane. It was a bit of a hike to customs, but one thing this trip had already taught us in spades was that it takes far more than a long walk to stop two gay men from reaching their final destination. Though truth be told, our brief visit to the Hawaiian Airlines lounge in the inter island terminal nearly drove us mad. It’s just mean to blast The Price Is Right in a small tile-floored room without providing a single drop of alcohol to dull the sensation. We made a hasty exit.

Two and a half hours later, the situation had improved dramatically.

We haven’t slept in 24 hours. Is it obvious?

When telling people about this trip, one of the things I was proudest of was my idea to build a vacation from the vacation into the vacation. All that running around Japan was sure to leave us feeling exhausted and I wanted to make sure we had a few moments to relax before coming home and resuming normal life. But I have to admit the final stop on our anniversary adventure turned out to be far more luxurious than we anticipated. It was just what the doctor ordered.

Say hello to the Andaz Maui, a stunning Wailea resort that puts a modern spin on Hawaiian hospitality. Beautiful grounds, outgoing employees and decadent accommodations all combine harmoniously on the shores of Mokapu beach. It’s just down the hill from one of my favorite places to stay on the island, Aqua’s Hotel Wailea. And the two properties share many qualities like spacious wet room-style bathrooms, gorgeous views, lush grounds and more. And while Hotel Wailea does feature an impressive open-air Japanese style public bath, the abundance of pools at Andaz (including an adults-only pool conveniently located just steps from our room) and beach access pretty much kicks sand in the faces of the other area hotels. Oh, it’s also really, really beautiful.

Andaz orchestrated the clever maneuver of building many of the features associated with far large hotels down the road into a resort that feels far more intimate and less chaotic (by which I mean overrun with poorly-behaved children and adults with terrible manners). This is a very relaxing place to stay that doesn’t overtly generate that “we have everything you need right here!” vibe. To that end, one of the most interesting things about this resort is how the staff tends to blend into the environment. Perhaps it’s the fact that there’s no real employee uniform to speak of, or that many of the guests are also carrying around iPads with them, but their presence is not readily apparent. That said, they are quite adept at spotting someone who might be in need of their assistance and not once did I feel like I had been set adrift. Heck, the hotel’s activities desk was so proactive as to e-mail me a few times during the month leading up to our visit in order to nail down any dinner reservations or adventures we wanted to partake in. So it was my own fault for not scheduling the outrigger canoe ride ahead of time, because by the time we arrived the complimentary excursion was all booked up for the days we would be there.

I guess we’ll just have to come back and stay with them again. Fine by me. I still want to check out Ka’ana Kitchen anyways.

During our 2 1/2 days on the island we saw old friends, relaxed on the sand, and ate at a few of our favorite haunts. Breakfast at Stella Blues Cafe has been a tradition of ours since we first started coming to Maui in 2008. Not only did they make a killer stack of banana macadamia nut pancakes, but they also had the best bloody mary on the island without question. I say “did” and “had” because sadly, the restaurant closed about 2 weeks after we arrived home from this trip. As many locals will attest to, Maui won’t be the same without Stella Blues. Had I any inkling, I would have savored that bloody mary like it was my last. I suppose we will just have to console ourselves with walu fish & chips at Pupu Lounge the next time we visit. And I’ll make sure to savor them, just in case.

This sounds like it might be the last post about our trip, right? Well it’s almost the last one. Stay tuned for my final musings on Japan. And if you haven’t already, check out all the photos from our adventure here and here.