Our first proper vacation since November 2012 started with ten days in Japan at the end of March. It was our first time visiting a country I have long been in love with, and the three cities we stopped in gave us sampling of the culture we won’t soon forget. The first stop on our field trip was Fukuoka, the largest city in Japan’s Southern island of Kyushu. While not nearly as large as Tokyo or as cosmopolitan as Kyoto, Fukuoka still stands out as a great example of Japanese culture and is definitely worth a visit. Barely spitting distance from South Korea, the city is a major West Coast center of activity and home to much of the nation’s robotics industry. More importantly to me though, it’s the birthplace of tonkatsu ramen.

It really is a shame that Hawaiian Airlines recently announced they were ending service to Fukuoka after almost two years. Officially, the airline cited that the main reason as a lack of awareness about Hawai`i by residents of Kyushu, but I suspect a much larger factor was that most Americans aren’t familiar with Japan’s version of… Well… Long Beach, California (though the summer humidity might have you comparing it to Atlanta instead). On our Sunday afternoon flight out of Honolulu, I could count the number of Non-Asian passengers on my hands. The main cabin was maybe 2/3 full at best. And all I could think to myself was that Americans are so bombarded with tour packages to Tokyo & Kyoto that Fukuoka couldn’t stand a chance of holding their attention.

I have news, Folks: You. Are. Missing out.

On what, you may ask? Well for starters, customs was an absolute breeze. Took less than a minute. And after a 10-hour flight from Honolulu, that was a welcome scene. The airport’s international terminal is modern and adorable, it’s smack-dab in the middle of the city, and transit service is fantastic. We got to our hotel in Canal City so fast! I was so relieved that we made this our port of entry, especially since we both slept very poorly the night before in Honolulu. (If anyone asks, the Sheraton Princess Kaiulani is an absolute DUMP. Avoid at all costs.) On top of that I only got a couple hours of sleep on the plane, so it’s safe to say I was feeling pretty cracked-out on arrival.

Settled in? Good. Now, if you’re like us, you love a good stroll through a lush park. And guess what? Oohori park is a freaking gold mine. It’s home to the ruins of Fukuoka castle, a gorgeous Japanese garden, a huge lake, and an art museum that’s actually pretty impressive. I really enjoyed their collection of modern art. Oh, and there are cherry tress. Lots and lots of cherry trees.

Looking over Oohori Park from the ruins of Fukuoka Castle

Chris & I arrived in the city a few days before the big blossom parties were set to begin, and I was amazed to see crews arranging hundreds of lights throughout the park for what was sure to be a huge community event. Many of the trees were already filled with flowers, but I’m sure it couldn’t compare to how they look when blooming at full-throttle.

It was raining off and on while we were in Fukuoka, but that wasn’t such a bad thing since it was nice to experience a proper spring season, if only for a couple of days. In Los Angeles, all we really get is either hot and dry or cool and dry. It was also a great excuse to check out Canal City’s ramen stadium several times and sample the offerings of some of the area’ s well-known purveyors of tonkatsu. 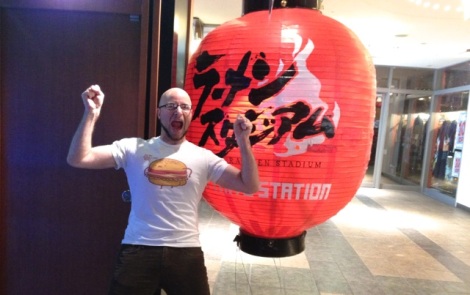 It’s conveniently located across from the Grand Hyatt Fukuoka, which is where we stayed. I cannot recommend this hotel enough, particularly if you’re looking for a luxurious experience. We felt so pampered during those initial days of adjusting to a totally different circadian rhythm. The staff were charming and helpful. The concierge was even kind enough to send me a list of some of her favorite local restaurants two weeks before we arrived. And when we did arrive? They sent up a free bottle of champagne to welcome us! The rooms are big, beautiful, and featured the most comfortable bed we had during our entire trip. And don’t even get me started on the bathroom. I made a trip to Lush at the PARCO shopping center for bath bombs because of that tub. (Funny story, I later discovered that there was a Lush at Canal City. Guess I don’t research things as well as I thought I do)

When it comes to impressive shrines, Fukuoka has a few whoppers to be proud of:

Shokfuji Temple is Japan’s first zen temple, and it’s not a small building. The temple itself is off limits to visitors but anyone can walk and explore the surrounding gardens. There are some very friendly cats who will even strike up a conversation with you if they like your vibe.

Japan’s largest wooden seated Buddha (along with the graves of the feudal lords who established the municipality) is just a block away at Tocho-ji temple. Sadly, they don’t allow photos of the buddha, but the grounds are also pretty amazing. There’s a beautiful pagoda there topped with a golden spire that alone is worth the visit. 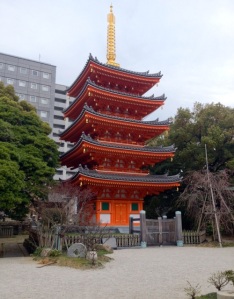 You’ll also find the Kushida Shrine closely, which is home old Hakata’s most well-known spirits. It is also the starting point of Oiyama, the crowning event in the finale of Fukuoka’s most famous festival, Hakata Gion Yamakasa. Show up here on the right morning in July, and you’ll be treated to the sight of hundreds of near-naked men vying to be the fastest to carry shrines along the nearby canal. I won’t lie, I’m tempted to book a flight back there just for this.

And about 20 minutes outside of the city in Sasaguri you’ll also find Nanzoin Temple, home a lounging Buddha that’s roughly the size of a jumbo jet. Yes, I said a jumbo jet. Clocking in at 134 feet long and weighing over 300 tons, it’s a massive sight at the top of Nanzoin temple’s hillside enclave. (We didn’t actually make it to this site due to rainy weather since it involves a fair amount of outdoor hiking.) 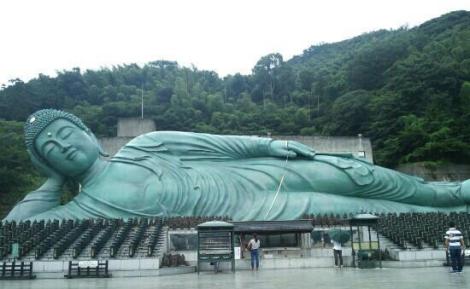 Then there’s , or as we call it, the Shrine of the Blessed Madam. It’s appropriately around the corner from Fukuoka’s “love alley” which you access by crossing a pink bridge over a canal. Because that’s not symbolic at all, right?

I could go on, but there’s more than just shrines in this city. Fukuoka Tower is Japan’s tallest seaside skyscraper, and even features a “selfie station” in the courtyard in case you want a shot of this massive erection behind your smiling mug. So of course, I did…

Right next to the tower is RoboSquare, which has a small number of very cool robots on display and a gift shop that would make any 10 year-old boy drain his savings account. We immediately gravitated towards a system they had set up that allows you to don digital garb and take a snapshot:

Come on baby, let’s get away. I’m gonna take you on a masquerade.

One thing we didn’t do in Fukuoka however, was check out any of the gay bars. Why? Well, even though there are around 50 bars in this city they’re actually very well hidden. Addding that their generally tiny size, specialized clientele (each bar caters to a specific type of mammal in the gay animal kingdom) and the need to have a somewhat decent handle on the language, it all felt like a bit too much effort for us to seek one out just for the sake of having a Jane Goodall Experience with kindred spirits. Also, we were pretty darn tired at the end of each day. If you want to learn more about Fukuoka’s gay scene though, I highly suggest you check out this article.

And after a little over two days, it was time to fly North to the massive capital city of Tokyo. So it was back to that charming airport named FUK for a ride on ANA to Japan’s sparkling capitol. Fukuoka, you’re adorable. I’d love to spend more time with you one day. Especially after I’ve learned a bit more Japanese.

Want to see more of our trip? You can see all of my photos from Fukuoka on Flickr.